The Funnel Express at OCAD 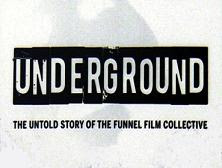 On Thursday, February 2nd, I attended a panel discussion at OCAD (Ontario College of Art and Design) titled "Underground: The Untold Story of The Funnel Film Collective" (1977-1988).

Avoiding through accident or by design a strict formality usually associated with such events, the program's guest speakers, former Funnel members of various disciplines, articulated vivaciously stories recounting moments of positive charge and, at times, dissent within the ranks of a grass-roots organization, as absorbing revelation.

To have missed the The Funnel's existence and the exciting dynamics that permeated Toronto-based 1970s/1980s experimental filmmaking and/or exhibition is to be left without a full comprehension of what boundaries could be broken, how expectations could be shattered, in this province by a man or woman armed with confidence and elan and a motion picture camera. Certainly at the time the cooperative gave one the explicit impression that something expressive and valid was happening in the city's independent cinema scene, if not a "movement" in the conventional sense. But steel balls and artistic provocation in a translucent box....
Posted by Simon St. Laurent at 9:40 AM