I have no plans to upload my entire "Yukon Crews" piece, but I thought I would post a few paragraphs. Here is Part One. Enjoy!

The first flight of a Yukon was made on November 15, 1959. Deliveries to 412 Squadron (VIP) began in mid-summer 1961. Veteran pilot Bill Cars explains the process of training pilots on the Yukon:  “All the pilots that were selected to fly on the Yukon were all sent to Cartierville (Quebec) and we took the ground-school. Five of us were checked out by Canadair's test pilots. I was checked out by Scotty McLean, one of Canadair’s test pilots. As soon as we had been checked out then we came back down here (Trenton) with a couple of airplanes and checked out the rest of the guys . . . one guy ran OTU (Operational Training Unit) and three would work for him. I was going back up to 412 Squadron but we took all the rest of them and converted them on these airplanes." Once the pilots were converted onto the Yukon, then began an involved trial period. Cars elaborates: "We'd go on simulated trips, raising and lowering the landing gear five or six times, flaps five or six times, and so on.  This was done to simulate multiple trips. We did a few long range trips here in Trenton. We took a couple of crews and flew over to Pisa, then from Pisa down to Leopoldville, and back up to Pisa and back home again just to see how it worked on long range trips. We took turns sleeping on the airplane and that kind of stuff. It was interesting work. It kept us going that summer."

Canadair completed twelve Yukons for the RCAF:  Two aircraft went to 412 'VIP' Squadron and the balance to (reactivated) 437 Squadron.

To be continued in Part Two of "Yukon Crews". 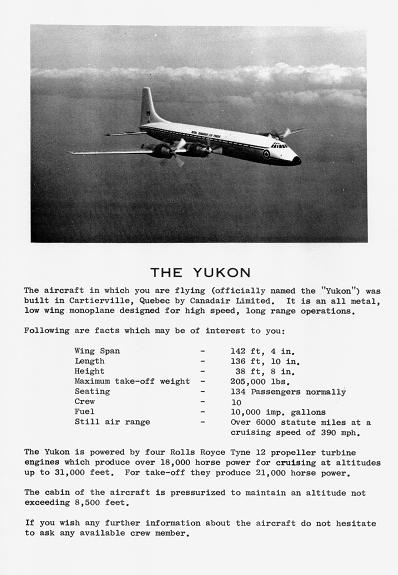 Especially relevant today given the prominence of Bombardier in the news. Seems they could learn a thing or two from Canadair!

My first draft was too long, which was to be expected. The limit imposed by the magazine was 4000 words. Cutting it down was not easy as there was enough material for an article of 10-12 thousand words, no problem.