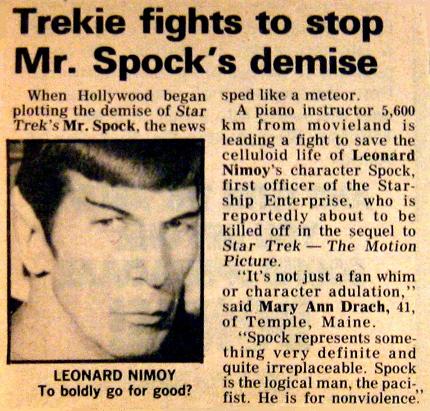 It's impressive, or scary, what I have in the archives. The above is something I stumbled upon recently. From early 1982, this Toronto Sun article is a sampling of the kind of press that the then 'still in production' sequel movie to Star Trek - The Motion Picture was garnering after Paramount Pictures let it be known that the beloved Mr. Spock was about to be killed-off. The producers of Star Trek - The Wrath of Khan* followed through with their plan, despite the hostile reaction from many fans. Personally, I really didn't care. My reaction was more one of: "Fascinating!"


(* While in production the film's title was first Star Trek - The Undiscovered Country then Star Trek - The Vengeance of Khan. The release title came about as there was another film in production at that time which had a similar ring to "Vengeance": Star Wars - The Revenge of the Jedi....)
Posted by Simon St. Laurent at 10:58 AM