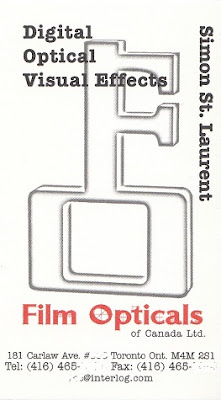 Of course, what "Film Ops" did then we can now do on a computer in our basement. Faster, cheaper, and with a heck of a lot less (potential) stress.
Posted by Simon St. Laurent at 6:04 PM

What a nice surprise to see the Film Opticals logo come up in a Google Search, Simon. Thanks for sharing this bit of nostalgia.

Ironically, you posted this just before Dad (Mike Smith) passed. Here's his obituary if you're interested. https://www.legacy.com/obituaries/thestar/obituary.aspx?n=michael-sidney-smith&pid=193210987

He loved his work at Film Opticals and all the people he worked with.

Thanks again for sharing.

Thank you, Suzanne! And you are most welcome.

I have nothing but fond memories of working with/for your father.

He possessed much wisdom regarding the film/tv business, and was a realist.

My favourite line of his: "That would be fantastic!" (Then picture me shooting all night long to get an important shot or two completed for an unrealistic producer.)